Effect of Sucralose (Splenda) on the Microbiome

Citations and transcript on NForg

Hey there, I noticed that sucralose is part of the vegan plenny shake, and I got a bit worried since a while ago I started following NutritionFacts.org where they discussed the topic of sucralose by means of scientific research. NForg is known for their complete and unbiased take on scientific research, where they try to find out: is there a conflict of interest, where does the money come from, can the given conclusion be drawn from their data, was there a control group, interventional study etc etc.

From what I remember, the conclusion NForg makes is that research shows that sucralose has adverse effects on the gut microbiome.

What are your thoughts?

Thank you very much for posting this video. Always interesting to get more input on the matter.
Although I would like give a well considered answer, it’s difficult to reply since I can’t find the sources of the articles which the guy uses for his argument. There have been many controversial opinions about the sucralose matter on the internet and we take all into consideration.

They are all listed and linked under the header “sources”. Just click the link for each source, and you can download and read them. If you’re still having trouble, perhaps I can try to grab them for you using my TU Delft account.

I am looking forward to your well considered answer

Let me help you with a few:


You know when a paper is well backed up when 50% of 53 pages is just the list of sources:

EDIT this is the paper that shows impact on human health:

Ah thank you very much, i’ll have a look at it. Let me get back on the matter.

So, I see they are comparing insulin response which sucralose gives to the insulin response water gives. Even the water gives a insulin response… The gut bacteria is more interesting, but it needs more study, the used studies are quite small and modest. The human study even mentioned that their study was too small and too short to make any conclusions. And to responds to the inflammatory bowel disease (IBD) conclusion; correlation is not causation. During the same time, other changes were occurring in processed foods, such as increased use of HFCS (in many cases, hidden) and increased glyphosate residues (from use of Roundup in agriculture), along with many people switching to newly popular dietary approaches.

So far this video is making a bold statement, it has a bit a clickbait-vibe to it. I don’t think we should reject these suspicions, but still, good studies and argues are needed to make conclusions about this subject.

Hey! Thank you so much for taking the time to study this matter! Really appreciate it.

I’d like to point out that, yeah all studies say more research is needed regarding gut microbes, but as far as I can tell it’s more about how and how much sucralose has a negative effect, rather than if it has. In rats it has already been shown with certainty to be bad on microbes that we humans share with rats.

To quote the 3rd paper I sent:

To quote a more recent review:

Data from studies in animals [74,75] and from a small study in human subjects [68] suggests that the bacteriostatic effects of NNS (non-nutritive sweeteners) are not limited to the microbial inhabitants of the mouth, but extend to those in the gut, thereby affecting the host metabolic phenotype and disease risk [76]. In a recent work, it was confirmed and extended these findings by identifying a microbe-mediated mechanism by which NNS might influence metabolism [68], inducing higher glucose intolerance, mediated by alterations in the GM.
https://pdfs.semanticscholar.org/7e7f/94b8c5843811d75915661b759d60e0e265f1.pdf

Furthermore,
Indeed, IBD rates shot up after the introduction of sucralose in Canada, could be a non-causal correlation, but as was pointed out in the video along with their studies: this happened in more countries that were studied where sucralose was introduced at that time. If we’d want to be sure that it’s not sucralose, we’d have to find out for each country what another cause would have been to make up for such a coincidence and to save sucralose’s name.

Since effect on microbiome of rats is clear and significant, has been confirmed (for now) in a small human study, and combining data of several countries suggest a strong correlation, I think we should assume that this gut effect is a real thing until proven otherwise. I for one, am not buying Jimmy Joy products for this reason (and other reasons which merit their own discussions).

As far as I know, stevia doesn’t have such significant problems. Perhaps it is worth investigating switching to stevia or any other more natural sweeteners?

Random idea: perhaps leave out the sweetening entirely, and let customers purchase aromas separately, such as: 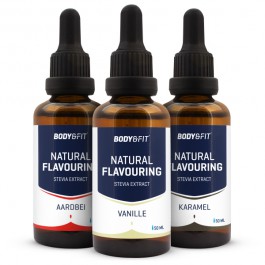 A friend just pointed out that the neutral vegan plenny shake has no sucralose, so for those concerned with their gut: perhaps purchase this one, and add some flavor yourself by mixing in some fruit, or the above linked flavor drops (sweetened with stevia).

To react to the 3rd paper:
So the study is based on two mice studies which are relatively small and a human study from just 7 (!) people which have been tested for 1 week. So this makes it already a shaky study. And to further get in on the wonky-ness of it all; no-one knows how the artificial sweeteners affect the gut and it seems unclear how 3 total different artificial sweeteners with different molecular structures effect in the same way and it seems unknown how the affect gut bacteria affect the health. The study seems interesting but can’t conclude anything yet.
Suspicion is a good thing but to conclude before anything has been proven, is not how I would approach it.

In reaction to the recent review:
For me animal studies are often poor predictors of human reactions to exposure, so I would be careful with the conclusions of the more recent review

Apart from this, I’m considering a stevia as sweetener mainly based on eco-friendliness of this ingredient compared to sucralose.

And true, we do have the neutral which you can sweeten as you like!

Hopefully my answer was satisfying <3

Thank you again for your answer! Indeed this one study may seem small, but it’s about the bigger picture combined with all papers, is it not? And shaky does not mean that they are wrong. Yes it seems to have an effect on the gut, but the microbes tested in these studies, are generally linked to health problems. Such as leaky gut syndrome, irritable bowel disease, depression, etc.

Indeed we are in the middle of the microbiome revolution, meaning we are starting to learn a LOT about the gut, and we still have to learn so much. However, one thing seems to be clear, we have massively underestimated its importance. We are human-microbe hybrids and are hugely dependent on them. Not to mention that the gut, not our skin, is the largest surface area of our body that is exposed to the outside world. On average about 32 m2!

Anyway, I think largely we are in agreement, but I’d like to take the “better safe than sorry” position, seeing how the collective evidence as of now seems to point to a problem.

For the same reason the CSPI has moved sucralose to “avoid”:
https://cspinet.org/news/consumers-should-still-avoid-sucralose-pending-more-testing-20170509

Good luck and thanks for the discussion. Looking forward to see stevia in Jimmy Joy!

I’m not really agreeing with these studies BUT if we want to delve deep into this chaos of opposing views, let’s consider the persons’ whole diet not just a single ingredient.

Sucralose supposedly harms the microbiome by increasing the gut pH - to be more alkaline. But isolated proteins (in Plenny Shake) are acid forming so this might alleviate the imbalance.

It’s not about the microbiota, but about metabolized by-products undetected during the regulatory decision process, which can be easily accumulated in adipose tissue.